About a year ago, we started selling domain names and the ability to use your own domain names on Edublogs blogs.

Well, after we did that for a while, we changed over to the Supporter model and that became tricky… but no longer, because we’ve decided to bundle free domain mapping in with Supporter, so that every single supporter can now use their own domain… at no extra charge!

How does it work? It’s really easy… let’s take Sue as an example:

So, Sue’s old personal blog had the very catchy URL of “aquaculturepda.edublogs.org” which was a bit off, seeing as it started life as ‘Mobile Technology in TAFE’ and then became ‘Sue Waters Blog’ ;)

So, we did the very simple thing of going out and purchasing suewaters.com (for less than $10), and then configured the A record by following our handy Using Your Own Domain guide.

Then we visited Tools > Domain Mapping, and simply entered the new domain there: 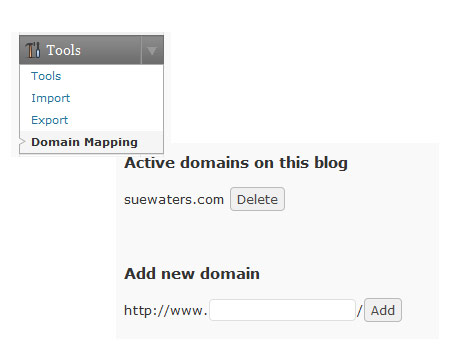 And that’s all there was to it… now you can catch Sue Waters at… suewaters.com!

As mentioned above, this is a new feature for Edublogs Supporters, at no extra cost, which we think is pretty darn cool.

Let us know any bugs / questions / comments / thoughts below :)